Morgenspaziergang consists of six separate drawings,
india ink on paper, dimensions (6) x 100 x
70 cm. Title of the work refers to a song from the
B side of Kraftwerk album Autobahn.

The drawings represent a structure generated by
repeating a rendered sample of a detail of a found
photo of a forest. Repetitive structure, and further,
a repeating drawings arranged in space allow a
possibility of a “walk through nature”, simultaneously
questioning the nature and uniqueness of a
drawing as such.

Walk through nature in the age of digital culture
raises questions about the uniqueness of our experience
and the possibility of communicating that
experience. The distance we have towards our
surroundings, no matter if it was urban or natural
space, is being emphasized by digital images, of
different qualities mediated through internet. The
work Morgenspaziergang raises questions not only
about the experience of nature, but also, about
the place and meaning of drawing as a very physical
and “slow” way of communication.

The drawings were made by using handcut stencil-
like templates, which were primarly used in
the process of painting. Templates were originaly
used to be painted through, and after the process
was finished, were used for the production
of the drawings. By doing so, the drawings become
the “B side” of the work, and are similary
positioned in relation to the main work as the song
Morgenspaziergang relates to the cover piece of
Autobahn. 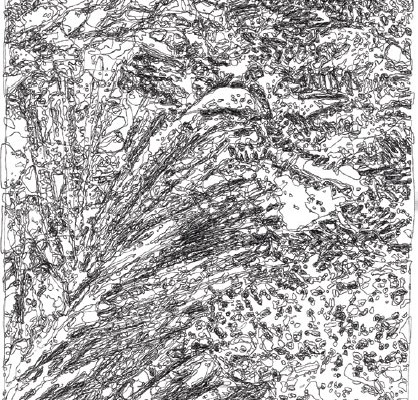